How much do you know about Agate?

Nowadays, the countertops used for decoration in our homes will basically choose marble or quartz stone, but have you heard of agate stone countertops? As a Quartz Stone Table Top Suppliers, let us introduce our new products. The Agate Countertops released this time is selected from quartz jade and agate materials. They not only have the toughness of traditional quartz stone plates but also have higher hardness than quartz stone. The hardness reaches Mohs 7, and it has the crystal clear and smooth resistance of jade. Acid and alkali anti-pollution is a high-end new surface material unique to the market. 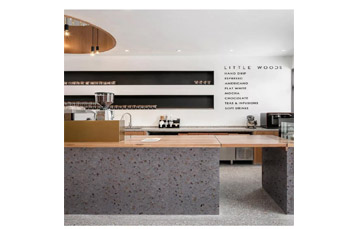 Agate's history is very far away. About 100 million years ago, underground magma spewed out a lot due to changes in the earth's crust. When the lava cooled, steam and other gases formed bubbles. The bubbles are sealed when the rock freezes to form a number of holes. A long-time later, the hole was immersed in a solution containing silica to condense into a silica gel. The fusible component of the iron-bearing rock enters the silica gel, and finally, the silica crystallizes as agate.

The successful development of the new stone agate, the use of jewelry raw materials in the construction of raw materials, our company seized the opportunity, the relevant test data shows that agate stone agate content as high as 90%, regardless of hardness, color, cost performance is not available on the market conventional materials Comparable, and very environmentally friendly, no chemical dyes.

In Western magic, teach people to write their wishes on a piece of paper, fold them and pack them, and after meditation, put them in the agate cornucopia. At least one day and one night, let the energy stir in it. After taking it out, The cremation is burned, and with the power of fire, your wishes are introduced into the natural world, and you can think of things. Wearing agate in summer is not only fashionable, beautiful but also cools down to prevent heatstroke. Agate is used as a gemstone or craftsmanship for its rich color and beauty. It can also be used to make bearings for precision instruments, industrial products such as agate carcasses and agate mortars. Agate is a kind of chalcedony, which is a variety of colored silica gelatin. The free silica is filled layer by layer from the peripheral wall of the rock void or cavity to form a concentric layer (annular band) block. Agate is used as an instrument material in the industry, and is often used in the production of high-end crafts in civilian products. The artificial agate is made of unsaturated polyester resin as the adhesive. The filler is mainly made of crystal powder, glass powder, and volcanic ash silica powder. The coloring materials are made of chrome oxide green, medium chrome yellow, carbon black, etc. Natural agate material.

Our company also has Quartz Stone Calacatta on sale, welcome to come to consult.

Previous: What are the advantages and disadvantages of Quartz Countertops compared to stainless steel countertops?

Next: Agate is coming now