Why is Quartzite Isolated from High-Temperature Objects?

As an Artificial Quartz Stone Supplier, share with you.

Quartz stone has become the most widely used stone in decorative stone. Quartz stone is made of 90% quartz crystal and 7% resin and other binders, and then formed by vacuum, high pressure and high vibration. stone. The surface of quartz stone is smooth, dense and non-porous, and its color is comparable to natural stone. At the same time, it has certain advantages such as toughness, no volatile gas, non-toxic and non-radiation, and large-area use without color difference. 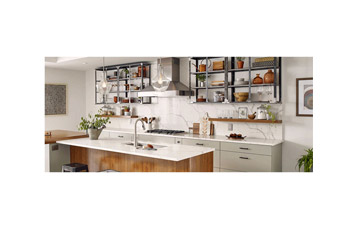 Quartz stone can be described as the perfect combination of natural beauty and high technology. The plate is die-casted by pressure of more than 50 tons, the hardness is not lower than Mohs hardness level 5, and the density is 2.6g / c m³. Quartz stone has a water absorption of only 0.02% and is resistant to penetration. The plate is cured at a high temperature of 150 degrees, so it has a high temperature resistance function. The quartz stone plate can withstand up to 300 degrees.

Quartz stone is widely used in the field of public buildings and home decoration because of its characteristics such as no scratching, no staining, no use, no burning, non-toxic and no radiation. The surface of quartz stone is flat and rich in color, which makes it have the texture of natural stone and beautiful surface gloss. When it comes to the gloss of quartz stone, it is inseparable from the process of polishing. Quartz stone is a polishing stone placed on the product to be processed, using machinery and equipment to run quickly and using "dry polishing, wet polishing" to achieve the polishing effect, so that the product surface will have a very strong reflected light, which is commonly said Gloss.

Our company also has Gold Calacatta Quartz Countertops on sale, welcome to consult.

Next: The Beginning of Spring